Follow Peter Turchin on an epic journey through time. From stone-age assassins to the orbiting cathedrals of the space age, from bloodthirsty god-kings to India’s first vegetarian emperor, discover the secret history of our species—and the evolutionary logic that governed it all.

There aren’t many highly cooperative species—but they nearly cover the planet. Ants alone account for a quarter of all animal matter. Yet the human capacity to work together leaves every other species standing. 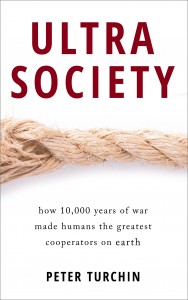 We organize ourselves into communities of hundreds of millions of individuals, inhabit every continent, and send people into space. Human beings are nature’s greatest team players. And the truly astounding thing is, we only started our steep climb to the top of the rankings—overtaking wasps, bees, termites and ants—in the last 10,000 years. Genetic evolution can’t explain this anomaly. Something else is going on. How did we become the ultrasocial animal?

In his latest book, the evolutionary scientist Peter Turchin (War and Peace and War) solves the puzzle using some astonishing results in the new science of Cultural Evolution. The story of humanity, from the first scattered bands of Homo sapiens right through to the greatest empires in history, turns out to be driven by a remorseless logic. Our apparently miraculous powers of cooperation were forged in the fires of war. Only conflict, escalating in scale and severity, can explain the extraordinary shifts in human society—and society is the greatest military technology of all.

Seen through the eyes of Cultural Evolution, human history reveals a strange, paradoxical pattern. Early humans were much more egalitarian than other primates, ruthlessly eliminating any upstart who wanted to become alpha male. But if human nature favors equality, how did the blood-soaked god kings of antiquity ever manage to claim their thrones? And how, over the course of thousands of years, did they vanish from the earth, swept away by a reborn spirit of human equality? Why is the story of human justice a chronicle of millennia-long reversals? Once again, the science points to just one explanation: war created the terrible majesty of kingship, and war obliterated it.

Is endless war, then, our fate? Or might society one day evolve beyond it? There’s only one way to answer that question. Follow Turchin on an epic journey through time, and discover something that generations of historians thought impossible: the hidden laws of history itself.

Read reviews for all Beresta Books including Ultrasociety

on Amazon.com (Kindle)
on Smashwords.com (epub)
on CreateSpace (Trade Paperback)

In Ultrasociety, we see a brilliantly original scientist at the top of his game. Turchin’s delightfully readable book defends a bold thesis–that the institutions that have made today’s extraordinary degree of human cooperation possible were forged by ten millennia of inter-societal military conflict. No future accounts of society’s origins will dare to ignore his carefully crafted arguments in support of this claim.–Robert H. Frank, Cornell University, author of The Darwin Economy.

Ultrasociety is a winner. It gives us an incisive look at Cultural Evolution and the implications for group selection. Turchin argues clearly and well for a deeper understanding of how culture trumps other social forces, and thus he can explain our era far better. –Gregory Benford, author of Timescape.

Peter Turchin will go down in history as a great scientific historian. In Ultrasociety he makes the thesis of Edward O. Wilson’s The Social Conquest of Earth come alive with empirical detail.–David Sloan Wilson, author of Does Altruism Exist? Culture, Genes, and the Welfare of Others.

An exciting account of how the growing theory of cultural evolution can be applied to understanding patterns in the sweep of human history and prehistory –Peter J. Richerson, coauthor of Culture and Coevolutionary Process.

Peter Turchin’s Ultrasociety delivers multi-level satisfaction, as deep-down enjoyable as seeing justice served on a bully. The book is a riveting safari through the origins of human social behavior and a revolutionary new way of reframing the study of culture as a scientific discipline. Turchin and his colleagues are on the cusp of changing the humanities forever, and none too soon. Ultrasociety is a must-read for any member of an intellectually curious species. –Baba Brinkman, author of The Rap Guide to Evolution.

As the Greek philosopher Heraclitus famously observed 2,500 years ago, ‘war is the father of all and king of all,’ but historians have been slow to appreciate just how profoundly true this statement really is. In this sweeping and boldly argued survey of the rise of civilization, Peter Turchin restores organized violence and conflict between groups to its rightful place as the key driver of social development. A tour de force! –Walter Scheidel, Stanford University, author of The Great Leveler: Violence and the History of Inequality from the Stone Age to the Twenty-First Century.