Seshat History of the Axial Age 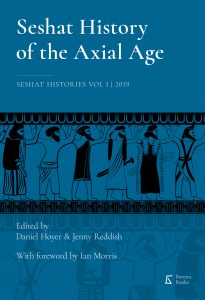 Fairness and equity, universal rights and freedoms, representative, balanced, democratic governance, the notion that no one is above the law— these are ideas many of us cherish in the modern world. But where did they come from?

According to some scholars, these features of modernity have their roots in the period between 800 and 200 BCE. In this “Axial Age,” they state, crucial intellectual, moral, and political changes took place more or less simultaneously in five core regions across Eurasia, reaching from present-day Greece, Israel-Palestine, Iran and India to China.

Seshat History of the Axial Age challenges the view that there was a single Axial Age in human history. Applying insights from a massive historical research project, Seshat: Global History Databank, the volume reveals that societies all over the world gravitated more strongly towards egalitarian ideals and constraints on political authority—traits usually associated with axiality—as they reached a tipping point in the evolution of social complexity.

In fourteen chapters, the authors survey earlier and later periods in history as well as developments in regions previously neglected in Axial Age discussions, thus expanding the Axial Age debate well beyond first-millennium BCE Eurasia. They explore whether there really was an Axial Age, where and when key changes that characterize modern life actually developed, and what drove societies to become more equitable and law-bound.

Co-editors Daniel Hoyer and Jenny Reddish paired some of the world’s leading historians, archaeologists, and anthropologists with members of the Seshat team. Using information on religious beliefs, social norms, and equity collected in the Seshat Databank, the authors find that traditional, archaic forms of rule, characterized by very powerful, unconstrained rulers and toleration for deep-seated social and economic inequalities, receded as societies grew in scale and complexity. In their stead, new forms of cultural systems evolved that fostered cooperation and societal cohesion on larger scales, such as systems favoring formalized law, institutionalized constraints on political authority, and ideals of egalitarianism and universalism.

“The data show that ‘axial’ traits emerged repeatedly,” says co-editor Dan Hoyer. “They did so in many parts of the world and at their own pace, some much earlier than 800 and others much later than 200 BCE. We see increasing social complexity as the driving force.”

Seshat History of the Axial Age offers an overview of “axial” religions, from Zoroastrianism to Confucianism, Buddhism and the Abrahamic faiths, as well as a series of regional histories. The chapters cover Greece and Italy, Israel-Palestine, Iran, India, and China, but also extend the analysis to Turkey, Egypt, Cambodia, Japan, Mali, Peru, the Mississippi Valley, and Hawai‘i. One chapter summarizes developments in largely overlooked small-scale societies in Northern India, Siberia, the Great Lakes region of North America, Papua New Guinea, Borneo, and the Amazon Basin. The introduction and conclusion were written by Seshat researchers. Ian Morris contributed the Foreword.

It’s an idea that has been influential for more than 200 years: around the middle of the first millennium BC, humanity passed through a psychological watershed and became modern. This ‘Axial Age’ transformed an archaic world of divine rulers, slavery and human sacrifice into a more enlightened era that valued social justice, family values and the rule of law. The appeal of the general concept is such that some have claimed humanity is now experiencing a second Axial Age driven by rapid population growth and technological change. Yet according to the largest ever cross-cultural survey of historical and archaeological data, the first of these ages never happened — or at least unfolded differently from the originally proposed narrative–  Laura Spinney, Nature

Seshat: Global History Databank is a unique tool for testing theories about our shared past. The dataset is continuously growing, capturing information on social complexity, religious beliefs and practices, and other traits for a global sample of societies from the Neolithic to the Industrial Revolution.

Daniel Hoyer, Project Manager with Seshat, is a historian and social scientist specializing in cross-cultural historical analysis. Jenny Reddish, Seshat’s Lead Editor, is an anthropologist working on the material correlates of cultural systems from societies around the world. She is based at the Complexity Science Hub, Vienna.

For more information, contact the Seshat team at seshatghd@gmail.com.